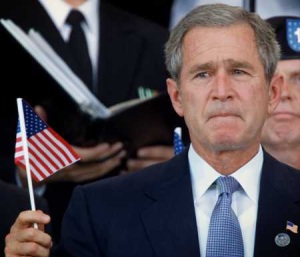 It seems that, despite a memorandum issued in early May by White House chief of staff Joshua B. Bolten, George W. Bush is trying to cram in as many as 20 “highly contentious” rules in his final weeks in office. According to Bolten, the memorandum states:

But despite this, the Labor Department is trying to complete a new rule that President-Elect Barack Obama openly opposes. That rule would essentially make it more difficult for the government to protect workers who are exposed to toxic substances and hazardous chemicals on the job.

The rule is, of course, supported by business groups. According to the New York Times, the rule says that:

…in assessing the risk from a particular substance, federal agencies should gather and analyze “industry-by-industry evidence” of employees’ exposure to it during their working lives. The proposal would, in many cases, add a step to the lengthy process of developing standards to protect workers’ health.

Margaret M. Seminario, director of occupational safety and health for the A.F.L.-C.I.O., says:

According to Seminario, this proposal could add two years onto a process that normally takes about eight or more years. What that means essentially is that workers health and safety may be endangered that much longer possibly resulting in more illnesses and deaths.

Representative George Miller, a chairman of the House Committee on Education and Labor, has added that the proposal would:

This is just one of many rules the Bush Administration is trying to push through before they leave office and turn the White House over to Mr. Obama. Others include permitting coal companies to dump rock and dirt from mining into streams and valleys, giving states the authority to charge higher co-payments for doctor’s visits, hospital care and prescription drugs provided to low-income people under Medicaid, and another to protect health care workers who refuse to perform abortions based on their moral and/or religious beliefs.

I’ll report on more of these as they arise. But take a look at what the current Administration is still doing in these last few weeks. It seems that despite the lowest approval ratings of any President ever, and a country whose citizens have given a “real” mandate to the President-elect to reverse the dangerous and damaging ways of the Bush Administration, President Bush still insists on forcing his will (and the will of the puppeteers behind him) on an America that has, in very large numbers, told him they NO LONGER WANT to live in a George Bush America. I guess he’ll go out as he came in: not as a bipartisan President with the interests of the American people at the forefront of his concerns, but as a selfishly misguided man who can’t admit or simply doesn’t realize how frighteningly wrong he’s been all along. 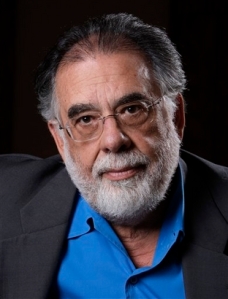 Francis Ford Coppola is and has been a great influence on me as a filmmaker as well as a source of my deepest admiration. Both via the films he’s made as well as in his approach to filmmaking. Yes, even some of the films that were difficult and painful experiences for him, those films which he didn’t feel reflected him fully as an artist, have had a lasting impact on me.

Through my ongoing journey to understand my desire to make films and tell stories, my many youthful fantasies of making those films in that once magical place known as Hollywood, and in watching and listening to great artists like Francis Coppola share their insights, experiences and wisdom, I have managed to not feel completely alone in my conclusion that Hollywood may, in fact, not be the best place for me to be making films. This is a subject I have written about before and return to often as I find myself in a transition period in my life and art. While still a resident of Los Angeles and Hollywood, and still surrounded by many “industry” friends and acquaintances, I have both mentally and artistically distanced myself from the very world I had once strived to be a part of. Through my experiences as a writer working with name producers, to my experiences making THE PLAGUE, my first feature as director, I have learned to trust less in the business of filmmaking and trust more in my own gut as both a filmmaker and a lover of film.

It is therefore that I am thankful and inspired when I stumble across great filmmakers whose experiences in the field, far greater than my own, seem to confirm my desire to follow my gut and my heart, even while so many around me–agents, lawyers, industry peers–seem to suggest my desired path lies somewhere between pipe dream and career suicide. But the more steps I take away from filmmaking as it is defined by the town and industry I physically inhabit, and move toward a place more centered around the artistry and love I have of films and filmmaking and my joy of working with people I admire, respect and whose company I enjoy, the more empowered I feel, the more inspiration I seem to find, the more excited I become.

And so I want to thank Mr. Coppola for sharing his thoughts and experiences in his introduction to the Blu-ray release of PATTON, a film for which he won the Academy Award for screenwriting, and let him know that there are filmmakers out there like myself who are not just listening to what he is saying, but actually hearing and finding inspiration in his words; the inspiration to follow a path dismissed by many, attained by few, but cherished by those lucky enough to trust their hearts.

Though not yet confirmed, the New York Post reports that:

“…although we didn’t think it would be possible to silence Ann Coulter, the leggy reaction- ary broke her jaw and the mouth that roared has been wired shut.” 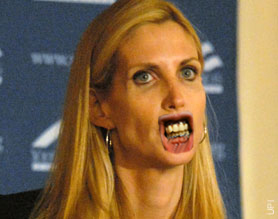 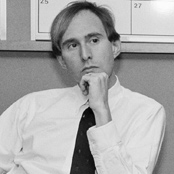 Roger Stone, according to thedailybeast.com, “has had a hand in everything from Nixon’s dirty tricks to Eliot Spitzer’s resignation to spreading discredited rumors of a Michelle Obama ‘whitey’ tape during the 2008 Democratic primaries.”

However, the biggest feather in Stone’s cap was the “Brooks Brothers riot” of the 2000 election recount (wonderfully recreated in Danny Strong and Jay Roach’s HBO film RECOUNT). Stone led a massive group of pro-Bush protesters to intimidate the Miami-Dade County election board and succeeded in stopping the recount and, many would say, gave George W. Bush the White House.

So it’s fascinating to hear Mr. Stone’s reflections on that event today:

“There have been many times I’ve regretted it. When I look at those double-page New York Times spreads of all the individual pictures of people who have been killed [in Iraq], I got to think, ‘Maybe there wouldn’t have been a war if I hadn’t gone to Miami-Dade. Maybe there hadn’t have been, in my view, an unjustified war if Bush hadn’t become president.’ It’s very disturbing to me.”

The film BARAKA was the first film since 1970 to be filmed in Todd-AO 65mm and the last as of this post. Director Ron Fricke, who was the cinematographer on the Godfrey Reggio film Koyaanisqatsi, takes the concept of that film–non-narrative images and music, ambient sound, no dialogue–and expands on it to create one of the most intense, emotional, startling, mesmerizing films I’ve seen to date. Fricke has not only managed to embrace the power of cinema and cinematic language, he has also embraced the power of man and nature, of culture and civilization, of spirituality and the cosmos.

BARAKA is a Sufi word meaning “a blessing, or the breath, or the essence of life, from which the evolutionary process unfolds.”

The images in BARAKA tell many stories, and those stories will change depending on the viewer. The themes are there, it is how we interpret them that is open. The film takes us on a hypnotizing odyssey through our world’s brightest and darkest moments. The emotions and reactions summoned by the film are many, from joyous to unsettling, but never pointless, never exploitative, never anything less than eloquent.

Fricke developed and patented a 70mm time-lapse system wherein the filmmaker can change the pace of time, while panning or tilting as if the viewer were casually witnessing these images in real time. It’s a startling and often breathtaking effect.

The evocative score by Michael Stearns is as integral a part of the film as the images themselves. In addition to Stearns, music by Dead Can Dance, L. Subramaniam, Inkuyo, Brother and David Hykes are also featured and work with seamless and enthralling perfection. A 96 kHz/24 bit audio remaster was done for the DTS-HD Master Audio and the result is a stunning aural landscape with such nuance and precision as to flawlessly transport the viewer directly into the images with all its lossless beauty.

The Blu-ray transfer is everything it has been boasted to be. BARAKA is the first 70mm film to be transferred at 8K. The original 65mm negative was used and scanned at 8200 pixels with state-of-the-art equipment at Fotokem Laboratories. The 8k film scanner took over 3 weeks to scan more than 150000 frames (approx 12-13 seconds to scan each frame) culminating in over 30 terabytes of digital information.

Project supervisor Andrew Oran has stated that this remastered Blu-ray of Baraka is “arguably the highest quality DVD that’s ever been made”. After having watched it, I would have to agree. At least I have not personally seen anything so far that surpasses its beauty and definition. Film critic Roger Ebert described the Blu-Ray release as “the finest video disc I have ever viewed or ever imagined.”

Fricke is currently working on the sequel to BARAKA titled SAMSARA which, according to Wikipedia:

“refers to the cycle of reincarnation or rebirth in Hinduism, Buddhism, Jainism, Sikhism and other related religions.”

In his own words, Fricke has said about his work:

“I feel that my work has evolved through KOYAANISQATSI, CHRONOS and BARAKA. Both technically and philosophically I am ready to delve deeper into my favorite theme: humanity’s relationship to the eternal.”

So while I wait with baited breath for SAMSARA, I can’t recommend highly enough a viewing of BARAKA on Blu-ray. It is, in many ways, a life-altering experience.

BARAKA In Blu: The Eyes Of The World

It’s hard to tell if the leaders of the world are rejecting George W. Bush or if he is rejecting them, but it’s clear from this video that there is ill-will at hand. Is it that the world leaders no longer have to pretend to like Mr. Bush now that Barack Obama is poised to fill his shoes, or is Mr. Bush carrying a serious grudge? Or maybe he no longer needs to pretend he likes them! Whatever it is, I’ll be glad when Barack Obama is sworn in and we can start shaking hands with world leaders once again and actually mean it! Check out this video from CNN:

“the most unpopular kid in high school that nobody liked.”

No Handshakes For George Bush At G20 Summit
THE HAL BLOG
Create a free website or blog at WordPress.com.