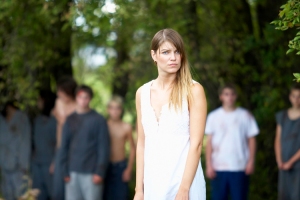 Every once in a while someone asks me that. And it’s a valid question. THE PLAGUE, even in my cut, is a flawed film. It was compromised before we shot a single frame and that’s the sad truth. But regardless, everyone involved –well, those who cared about the integrity of the film and its story, rather– believed that even a low-budget genre film could have something to offer, could extend the reach of the genre’s more recent conventions and create something unique, something with a voice, a film with something to say, questions to ask. So for all the people who had hoped this film would offer something of that, however small, myself included, it remains important to stand up for the film we set out to make and the intentions behind making it. For our reputations, for what the film attempted to say, and for future films and filmmakers that find themselves in a situation like ours. For me, it’s being true to who I am and to the promises I made to both myself and others. And, strange as this may sound, to the audience that may have actually gotten something, anything, out of watching this film.

I make no claims to THE PLAGUE being a masterpiece or even great cinema, but it’s better than what was presented. It’s more than what was handed to the public with our names and reputations attached. And for anyone who saw some trace of something decent, something interesting and possibly thought-provoking hiding at the edge’s of the producers’ cut and wondered to themselves, “What happened here?” and took that extra step to find out the answer to that question, I wanted to make sure there was an answer out there; I wanted them to know that someone gave a shit and tried to offer them something better, smarter, than what they were given.

Here’s the latest comment posted to our ever-growing petition to Screen Gems:

“Having watched part of the clive barker film last night I was frusutrated as there was clearly a message that the film didn’t properly show, leading me to look at the grapes of wrath and to the website for the film. I find horror films very boring which is why i turned over part way through as it was just a slasher pic and what is the point of those?but flicking through the channels happened to see the last few minutes so tried to see some of the film on the +1 channel but it was still just a slasher pic. leaving me unsatisifed and thinking it was a good film gone wrong. THIS WAS ALL BEFORE I SAW THE INFO IN THE WEBSITE AND KNEW ITS HISTORY.”

Makes it all worthwhile for me every time someone writes something like this. So long as the truth behind this film and its intent is out there for people to discover, then there’s still some hope that at least people are still trying to make decent films and that, next time you see a film that should have been better than it was, you might realize that there’s a good chance it actually had been. At least at some stage. And then maybe, MAYBE, if we’re really lucky, people will start asking for what they should have received, all those films that might have effected them in some way that they were denied for a myriad of reasons. One of those reasons being a lack of faith or respect for the vision and passion behind the work itself and the people imagining and fighting to bring it to life. Yes, even if it’s just another low-budget horror film.

Working in the film industry, it is so easy to forget that not everyone knows how things work here and what happens behind the scenes. Too many people believe that the films they see are the films that the writers and directors intended them to see. It is very often not the case. The average person doesn’t know the lengths to which a film can be entirely re-imagined in editing and post. And then there are the people within the industry and elsewhere –in this bizarre age of celebrity obsession– who believe that it is more than enough to simply get a film made, any film, no matter how it turns out. That it’s the credit that is important. For some, that may be true. But for many out there, the credit means nothing if the creative vision for the film never makes it to fruition, if the storyteller’s voice is rendered obsolete. During post-production on THE PLAGUE, when we were told point blank by Sony Screen Gems’ Head of Acquisitions “We own this now and see no reason for the writers and director to be involved,” I knew my work on this film was just beginning. And all these years later, I’ve never been more proud of that work.